“I am herewith offering my services for the Army Medical Corps” 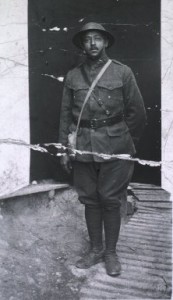 Limited in his resources, Dr. Bass made house calls on a regular basis and often performed surgeries and other medical procedures on kitchen tables inside his patients’ homes.3  Most of his patients could not afford to pay him for his services, so they usually repaid him through various forms of work and oftentimes with food.4 Nonetheless, Dr. Bass was able to earn enough money to open a pharmacy that would also serve the local African American population. In a partnership with Warren W. Lee, Dr. Bass opened the Commerce Street Pharmacy on Saturday, April 29, 1911. The local newspapers at the time reported that a “competent druggist” would run the pharmacy.5

On April 6, 1917, the United States declared war on Germany.  Dr. Bass did not hesitate to volunteer his services and expertise to his country. Though he was in his late thirties and well beyond the age of conscription, Dr. Bass pled with United States Secretary of War Newton D. Baker to allow him to serve. In a letter written to Baker, Bass stated:

Realizing that patriotism and loyalty should be paramount to in the least of all American citizens at this time, and feeling (although a negro) that loyalty for my country and the desire to serve her in this critical period, I am herewith offering my services for the Army Medical Corps should there be a need for a negro physician for that branch of service. 6

Even with such heavy odds against him, the doctor’s wish was granted by June of 1917, and he gained a commission in the Army’s Medical Reserve Corps as a lieutenant.

Dr. Bass passed all of his entry medical exams and began his training by July 1917 at Fort Oglethorpe in Georgia. By August he was promoted to first lieutenant and was assigned a full medical position in the Medical Reserve Corps 372nd Regiment, Infantry, 93rd Division. Back home in Fredericksburg the community held a reception in his honor, and the local newspapers noted that he was much respected in the black and white communities.7 In December of 1917, Dr. Bass went home on furlough to visit his family and friends one last time before his deployment overseas. After a short stay in Fredericksburg, the doctor shipped out of Newport News, Virginia, and was sent to the front lines in France.

Not much is known about Dr. Bass’s service overseas because many of his military records have been lost since the war.  However, we do know that Dr. Urbane Bass was killed in France near Beausejour north of Minaucount on October 4, 1918, only a month prior to the war’s end.8 According to a letter sent from a friend to Bass’s wife, the doctor died a hero: he was tending to fellow soldiers, dressing their wounds while in the line of fire, when a mortar shell exploded at the top of a hill. Shrapnel tore off both of his legs. Dr. Bass directed others how to treat his wounds while he was being rushed to a field hospital, but he succumbed to his wounds before they reached the hospital.9 He left behind his wife and four children back in Fredericksburg.

In December of 1918 the Fredericksburg community decided to raise money to put up a stained-glass window at the Shiloh Baptist Church where Dr. Bass once worshipped. Both the black and white members of the community donated money in memory of the respected doctor.10 A memorial exercise was held on January 29, 1919, at the courthouse for Bass. His former business partner, Warren W. Lee, presided over the ceremony, which included Mayor Josiah P. Rowe, Judge John T. Goolrick, Reverend Will Ransome, and F.D. Bowes, all prominent members of the Fredericksburg community.11

Donations for the window were collected for over a year, and the church was finally able to purchase the memorial for Dr. Bass in March of 1920.12 By May of the same year, the church installed the window, and a dedication ceremony for it was held on July 12, 1920, with a large crowd in attendance.13 Only a few short weeks later Dr. Urbane Bass’s remains were relocated from their original burial site at another cemetery in Fredericksburg and placed in the Fredericksburg National Cemetery. Dr. Bass was the first African American officer to be buried at the cemetery off of Lafayette Boulevard.14

Though the Fredericksburg community lost a beloved, kind, courageous, and humble man, they came together during a time of war and great conflict to honor a hero. Dr. Urbane Bass was posthumously awarded the Distinguished Service Cross, the second highest award in the Army, for his gallant efforts during his time of service.15 Dr. Bass served both his community and country with great pride and honor, while also putting his own life before others.  The doctor’s efforts are just one example of the countless patriotic stories from the Fredericksburg community during the Great War.